Here are a few recent pictures of summer. All of these photos were made with the iPhone.

The quality of this photo isn’t great at all, but here you can see a mama robin and three little baby birds. The mama robin came back (well, I don’t know if it was the same one), but this time, the baby birds are clearly visible. I took this picture a few days ago. She is, as I predicted, protective of the babies, but she flies away as soon as she hears the front door open. One day, I peeked out the front door, with the door open just a sliver, wondering if I could see well enough to get a photo, but it wasn’t possible from that angle. That robin mom watched me from very close and made quite a bit of noise to warn me to stay away. “I got the message, bird. Just trying to get a picture.”

Well, we move locations now. This is in the deep south, at my parents’ home, and this is the deck. You can’t see it from this picture, but if you can imagine looking to the right of this photo, across the driveway, you will be looking at the neighbor’s yard and their swimming pool. My older son wanted to enjoy an early morning swim (they allow us to use the pool whenever), so I sat on the deck to watch him. I heard a rooster’s morning call in the distance. Anyway, the flower in this photo is called a four o’clock. According to their name, they are supposed to bloom around four o’clock. I took this picture between 7-8 am. Hmm. 🙂 I read they are supposed to bloom in the evening.  My mother said hers are perennials, and she told me what she does to keep them blooming. I don’t think they are perennials in the upper Midwest, if they even have many of them around as annuals. I think I remember my neighbor talking about them one year. She was the first person I heard use the term “old-fashioned flower”. I had never heard of a flower being old-fashioned. I understood it to distinguish between the new and hybrid varieties and those that have been around for 30, 40, or 50 years. I suppose in the world of flowers and gardening, there are old-fashioned varieties and those that are new. In fact, I was at one garden store in my area recently, and asked them if their store was related in any way to another store I had been to. No, they replied, the other store is more of a “designer” store. Again, that was a new term for me. Does it mean unique, and expensive?  Apparently, there are designer flowers, and old-fashioned ones, too. I don’t care one way or the other. I could care less what is considered “new” or “old” or whatever. God takes credit for them all.

Here is a close-up of the four o-clock. This one was facing east, so it turned out bright and too exposed in this photo. Since the picture was taken on a mobile phone, and the outdoors was so bright, I couldn’t really tell what this photo was truly looking like at the moment. It sure is bright, but I love the color of this flower.

When I moved into my first home many years ago, someone asked me if I liked gardening. I said no. Truthfully, I had no interest in it at all. I couldn’t quite understand how other people really enjoyed it. It was amusing that was one of the first questions I was asked; it made me feel like I was “supposed” to be interested in it. It’s been over 20 years now, and I can say I enjoy it much better now and even do like it. I get annoyed with the thistles and weeds, though (like everyone else). I was told that the original dirt used around the house contained thistles; hence the continual battle with this one weed. It is frustrating and it seems like a never-ending battle. Moreover, though I prefer the look of mulch/wood chips over pea gravel, the weeds and thistles are making me wish there was pea gravel instead of mulch that needs periodic replacing.

We went to visit some of my mother’s friends, and they had a lemon tree, bursting with unripe, green lemons. It just made me wish I lived in a place I could have a lemon tree. (What is wrong with me, that I have been writing about plants lately?!? I feel so old when I talk about plants. I don’t know what it is and why I am doing that. Whatever. Just going with it right now.) 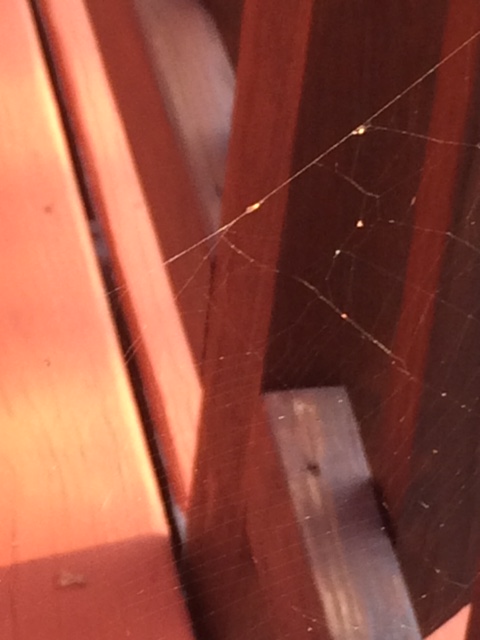 The book, Charlotte’s Web, was mentioned somewhere recently and that’s probably why for some reason, this spider web reminded me of that book. This spider web was very close to the four o’clock flower pot. No Charlotte counterpart was visible, though.

My younger son, who has always liked snakes and insects, kept saying how much he really wanted to see a snake. There are lizards that scale the exterior of the brick walls of my home in the south, but he wanted to see a real, bona fide, poisonous snake. I told him I am aware that rattlesnakes, copperheads, and cotton mouths were for certain in my home town area, and I am sure there are others. I told him about how I saw a copperhead slithering in the middle of the steaming, hot street one summer years ago, and how a neighbor dealt with the creature. I told him the story of the rattler that ended up in my house once, too. I told him how a popular swimming hole had to be closed because of the sighting of a cottonmouth. I told him that garter snakes (harmless yard snakes) were found in my yard when I was a kid. Snakes do exist in the upper Midwest, too, though sightings are less common. Once at Noah’s Ark, a popular water park in WI, I was on some sort of water ride and saw a water snake swimming with its head above the water! That wasssss unexpected, let me tell you. 🙂 I do believe that there are no poisonous snakes in the upper Midwest, but that is not true at all for the South, where it is wise to watch out in wooded areas. 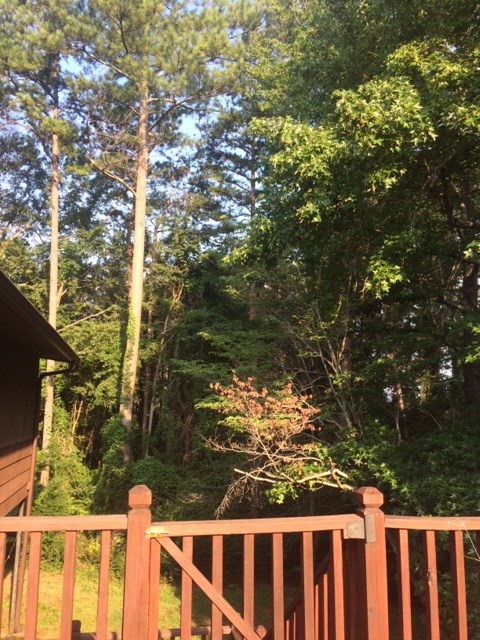 Next, I bring you a view from a cabin in the woods.

No – not really! That isn’t true! It is actually the view from my parents’ deck, to the side and back yard. 😀 Did you really believe me? I think it could truly pass for a cabin in the woods from this angle. I just love this view of the trees.

Isn’t it gorgeous? This year, in the fullness of midsummer, the yard was full of the symphony of cicadas and crickets, but mostly cicadas. On the far left edge of the photo, you can see a bit of the 2nd story screened porch. Even on steamy summer days, it is possible to stay cool on the porch. It is very pleasant in the early morning and evening on very hot days, but most of the year it is possible to sit and enjoy out there. 🙂 This is one thing I enjoy and miss: the back screened porch and the serene view from there.

It is always hard for me to believe how quickly summer seems to roll on by. It is nearly the end of July now, and then it will be August. Some schools start back in August; some not until September. But August is still that last wind-down month of summer, the month for the last hurrahs of summer: picnics, splashing in the water, outdoorsy things. I always wish for it to be longer… like a child asking for extra time to stay up at bedtime, I am asking for more summer and sun, because the dark night is looming (aka, the long, dark, brutally cold winter…..)