This week, I will continue on the theme from the recent July 4 Friday Feature, a naturalization ceremony held at the Coolidge Historial site and homestead, in Plymouth Notch, Vermont. While at the event and visiting the museum, I noticed a plaque on the wall with one of Coolidge’s quotes.

“Nothing in this world can take the place of persistence. Talent will not: nothing is more common than unsuccessful men with talent. Genius will not: unrewarded genius is almost a proverb. Education will not: the world is full of educated derelicts. Persistence and determination alone are omnipotent.”

I enjoyed that quote, and heard a few more during the visit to the Coolidge site, so I thought it would be interesting to read more. I used search engines to find other Coolidge quotes. I chose several and attempted to divide them up into three main categories: General Wisdom/Spirituality, Education, and Politics/Government.

Coolidge was Vice President when President Warren G. Harding died suddenly in 1923. Calvin Coolidge took the oath of office in the middle of the night. His father, a notary public and justice of the peace, administered the oath in front of a small group of reporters at 2:47 am, by the light of a kerosene lamp. His home had neither a phone nor electricity. 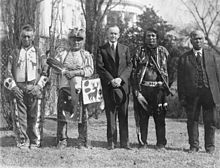 He was known as “Silent Cal” while he was Vice President, and that title held true for him as President. Coolidge won the 1924 Presidential election, but he was also grieving the loss of the death of his youngest son, Calvin, at age 16. He chose not to seek re-election in 1928, and died suddenly a few years later, in 1933. Interestingly, he is the only President that was born on July 4. While I was there on July 4, numerous events were scheduled at the Coolidge Historical site, including a Coolidge impersonator, who dressed like  Coolidge and gave several readings and speeches throughout the day. The day’s festivities included an old-fashioned string band, a cookout, a naturalization ceremony, games, and a debate competition. It was fascinating to learn a little more of a lesser-known President.

I have noticed that nothing I have never said ever did me any harm.

I have never been hurt by what I have not said.

If you don’t say anything, you won’t be called on to repeat it.

You don’t have to explain something you haven’t said.

It is only when men begin to worship that they begin to grow.

Don’t you know that four-fifths of all our troubles in this life would disappear if we would just sit down and keep still?

If a painting of a tree was only the exact representation of the original, so that it looked just like the tree, there would be no reason for making it; we might as well look at the tree itself. But the painting, if it is of the right sort, gives something that neither a photograph nor a view of the tree conveys. It emphasizes something of character, quality, individuality. We are not lost in looking at thorns and defects; we catch a vision of the grandeur and beauty of a king of the forest.

Knowledge comes, but Wisdom lingers. It may not be difficult to store up in the mind a vast quantity of facts within a comparatively short time, but the ability to form judgments requires the severe discipline of hard work and the tempering heat of experience and maturity.

There is new life in the soil for every man. There is healing in the trees for tired minds and for our overburdened spirits, there is strength in the hills, if only we will lift up our eyes. Remember that nature is your great restorer.

It is a very old saying that you never can tell what you can do until you try. The more I see of life the more I am convinced of the wisdom of that observation.

Education should be the handmaid of citizenship.

If we wish to erect new structures, we must have a definite knowledge of the old foundations.

The nation which forgets its defenders will itself be forgotten.

Ever since I was in Amherst College I have remembered how Garman told his class in philosophy that if they would go along with events and have the courage and industry to hold to the main stream, without being washed ashore by the immaterial cross currents, they would someday be men of power. He meant that we should try to guide ourselves by general principles and not get lost in particulars. That may sound like mysticism, but it is only the mysticism that envelopes every great truth. One of the greatest mysteries in the world is the success that lies in conscientious work.

The only way I know to drive out evil from the country is by the constructive method of filling it with good.

Those who trust to chance must abide by the results of chance.

We need more of the Office Desk and less of the Show Window in politics. Let men in office substitute the midnight oil for the limelight.

Little progress can be made by merely attempting to repress what is evil. Our great hope lies in developing what is good.

Politics is not an end, but a means. It is not a product, but a process. It is the art of government. Like other values it has its counterfeits. So much emphasis has been placed upon the false that the significance of the true has been obscured and politics has come to convey the meaning of crafty and cunning selfishness, instead of candid and sincere service.

It is a great advantage to a President, and a major source of safety to the country, for him to know that he is not a great man. When a man begins to feel that he is the only one who can lead in this republic, he is guilty of treason to the spirit of our institutions.

There is only one form of political strategy in which I have any confidence, and that is to try to do the right thing and sometimes be able to succeed.

If we are to have that harmony and tranquility, that union of spirit which is the foundation of real national genius and national progress, we must all realize that there are true Americans who did not happen to be born in our section of the country, who do not attend our place of religious worship, who are not of our racial stock, or who are not proficient in our language. If we are to create on this continent a free republic and an enlightened civilization that will be capable of reflecting the true greatness and glory of mankind, it will be necessary to regard these differences as accidental and unessential. We shall have to look beyond the outward manifestations of race and creed. Divine providence has not bestowed upon any race a monopoly of patriotism and character.

Any man who has been placed in the White House cannot feel that it is the result of his own exertions or his own merit. Some power outside and beyond him becomes manifest through him. As he contemplates the workings of his office, he comes to realize with an increasing sense of humility that he is but an instrument in the hands of God.

It is difficult for men in high office to avoid the malady of self-delusion. They are always surrounded by worshipers. They are constantly, and for the most part sincerely, assured of their greatness.

The words of the President have an enormous weight and ought not to be used indiscriminately. It would be exceedingly easy to set the country all by the ears and foment hatreds and jealousies, which, by destroying faith and confidence, would help nobody and harm everybody. The end would be the destruction of all progress.